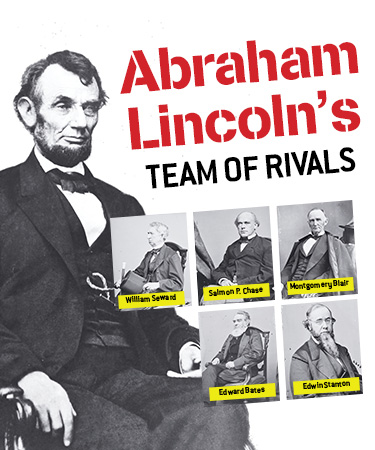 Many of the President’s closest advisers did not like or respect him—at first.

By Steven Wishnia and Sean Price

* indicates a fictional character. All others were real people.

Prologue narrator: March 1861 was a dark time for the United States. The nation was on the brink of a civil war. Seven Southern states had seceded [separated] from the United States and formed the Confederacy. The Confederates were demanding that the Union abandon Fort Sumter, a U.S. Army base that guarded the harbor of Charleston, South Carolina.

Abraham Lincoln had just been sworn in as President of the United States. Lincoln appeared to be an unlikely leader. He had served only one term in the U.S. House of Representatives and eight years in the Illinois State Legislature. In gaining the Republican nomination for President, Lincoln had upset three better-known candidates: Senator William Seward of New York, Ohio Governor Salmon P. Chase, and Judge Edward Bates of Missouri. Although these men had little respect for the man who defeated them—or for each other—Lincoln chose them for top posts in his Cabinet. Historians would call the group Lincoln’s “team of rivals.”

Narrator A: On the very day he takes office, President Lincoln receives an urgent message from Fort Sumter. The troops there are running dangerously low on food. He soon calls a Cabinet meeting to discuss the crisis.

Abraham Lincoln: South Carolina is blocking us from going to Fort Sumter’s aid. Is it wise for us to attempt it anyway? Please let me know your thoughts.

Narrator B: Each member of the Cabinet considers his response.

William Seward: Resupplying Sumter would mean war—a national disaster! Let those who seek to destroy this Union strike the first blow—not us.

Salmon P. Chase: Taking action might so inflame hostilities with the South that we would have to enlist an army and spend millions of dollars. If so, I would advise against it.

Montgomery Blair: But if we surrender Fort Sumter, the rebels will claim that Northern men lack the courage to maintain the Union.

Narrator C: Of the seven Cabinet members, only Blair is strongly in favor of resupplying Sumter. Seward is passionately against it. But the final decision is Lincoln’s. He struggles with it for days. Finally, he decides to reinforce Fort Sumter. When Seward hears of this, he is furious.

Seward: Thunder! It cannot be! I want no more of this administration. We are not yet in a position for war.

Narrator E: The war goes badly for the Union at first. In July, Confederate troops rout Union forces at Bull Run, Virginia, only 26 miles from the nation’s capital. Many Northerners are quick to blame Lincoln. One evening at Secretary Chase’s house . . .

Chase: The President is like a person just aroused from sleep. He won’t consult with the Cabinet.

Anna Simpson: I heard the most amusing story. Lincoln writes little notes for his speeches and keeps them in his hat.

Kate Chase: Yes, they fall out at odd times. The man really is a buffoon. Too bad he won’t listen to wiser men. I just hope you can replace him in four years, Father.

Narrator A: Lincoln hears of these insults but ignores them.

Mary Todd Lincoln: The Cabinet is supposed to be made up of the President’s closest advisers. How can you trust these people?

Lincoln: I couldn’t have become President without their support. They have many friends, and I need their friends right now.

Mary: They will all stab you in the back. Mark my words.

Narrator B: Lincoln is greatly frustrated by the failure of Union Army Commander General George McClellan to boldly attack Confederate armies. In March 1862, Lincoln demotes McClellan, giving part of his command to General John C. Frémont. This offends Blair, who supports McClellan. Then Frémont gives the press a letter from Blair that questions Lincoln’s judgment. Ashamed, Blair seeks out the President.

Blair: It was a foolish letter. I will make amends by resigning.

Lincoln: It is of no consequence. Let us never mention or think of it again.

Blair: I understand, Mr. President. You need to prevent divisions.

Narrator C: At the same time, Seward’s respect for Lincoln is growing. He writes of it in a letter to his wife.

Seward: His confidence and sympathy increase every day. The President is the best of us, but he needs our constant cooperation.

The Union victory at Antietam in September 1862 led to the issuing of the Emancipation Proclamation.

Narrator D: Lincoln often serves as the balance between factions in his Cabinet. Conservatives believe the war should be fought to preserve the Union. Liberals want to make it also about emancipation—freeing the South’s slaves. In one argument . . .

Edward Bates: Also, many in the North see freed slaves as competition for jobs.

Edwin Stanton: But freeing the slaves would damage the South’s economy and bring it to its knees.

Narrator E: By the summer of 1862, Lincoln agrees that it is time to free the slaves. He prepares a document called the Emancipation Proclamation and reads it to the Cabinet.

Stanton: I think you should issue this right away, Mr. President.

Chase: It goes too far, and will only increase support for the rebels! We should wait and have the Army free the slaves in the districts we’ve won.

Seward: I support the statement, but worry about its timing. Our armies have not won in a while. This could look like a last shriek on the road to retreat.

Lincoln: You are wise in your counsel, Mr. Seward. We will announce this only after winning a major battle.

Narrator A: On September 17, 1862, Union forces stop the rebel army at the battle of Antietam in Maryland. That is enough of a victory for Lincoln to announce the proclamation, which declares slaves in Confederate states free as of January 1, 1863.

Narrator B: By 1864, the tide has turned, and the North is winning. Still, dissension remains in the Cabinet.

Lincoln: Blair thinks that I should get rid of the entire Cabinet and name his father as my special adviser. And now Chase has resigned—for the fourth time.

Seward: The last time he just wanted you to beg him to stay. I’m sure he’s playing the same game now.

Lincoln: Chase has been a great Treasury Secretary. He almost single-handedly funded the war effort.

Seward: Yes, but he wants to be President. It’s time to let him go.

Narrator C: Lincoln accepts Chase’s resignation. But the President does not hold any grudges. Later . . .

Lincoln: I have good news, Mr. Alley. I have just named Chase as Chief Justice of the United States.

Congressman John Alley: Glad to hear it. Chase is my friend. But I am shocked, Mr. President! He has criticized you from the start.

Lincoln: I know meaner things about Governor Chase than anyone can tell me. Still, he is a pretty good fellow and a very able man. His only problem is that he has “White House fever.” I hope this may cure him.

Epilogue narrator: Five months later, on April 9, 1865, the South surrendered. But on April 14, Lincoln was shot. He died the next morning. As President, Lincoln amazed people with his ability to forgive rivals and use their talents. In the end, his largeness of heart earned nearly everyone’s respect—especially William Seward’s. “I believe that all men will come to see him as I have: a true, loyal, patient, patriotic, and benevolent man,” Seward said. “Abraham Lincoln will take his place with Washington and Franklin and Jefferson . . . among the benefactors of the country and of the human race.”

All photos courtesy Library of Congress

Like what you see? Then you'll love Junior Scholastic, our Social Studies classroom magazine for grades 6–8.