We’ll send you updates on digital features and tips here throughout the year. Check out Junior Scholastic At Home for our favorite stories and tools to kick off your year.
Explore
Dismiss

Sharing Articles with Your Students 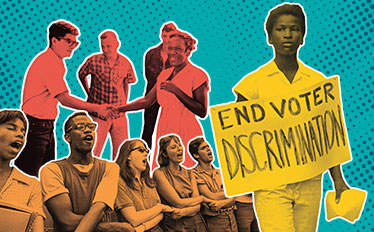 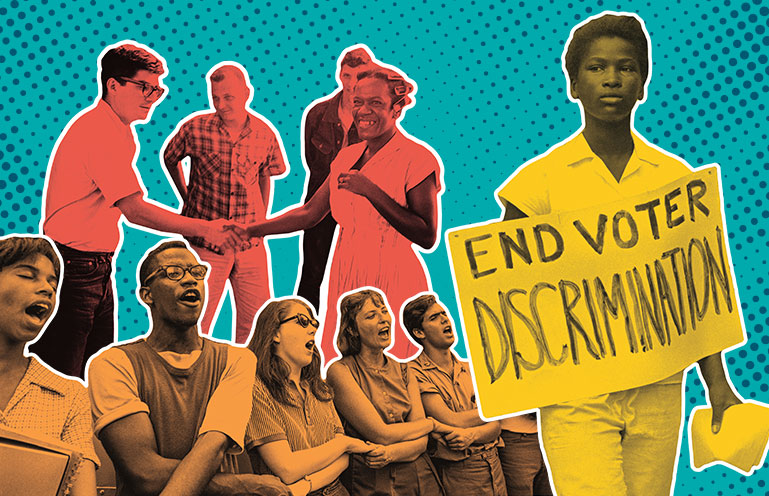 In the summer of 1964, hundreds of young volunteers joined Black Southerners in the struggle for a basic American right.

As You Read, Think About: What can we learn from talking with people who experienced historic events?

Being able to vote in elections is a right Americans often take for granted. But for African Americans in the Deep South of the 1960s, even trying to register to vote could be fatal.

It had been that way for nearly 100 years. When the Civil War (1861-65) and slavery ended in 1865, white Southerners in some states found themselves outnumbered by the people they’d once enslaved. Then, in 1870, the 15th Amendment became law, guaranteeing African Americans the right to vote. Fearful of losing their grip on power, white legislators passed state and local laws to prevent Black citizens from exercising that right.

Some laws required voters to pass written tests to cast a ballot. Such tests were designed to be too hard for formerly enslaved people, who hadn’t been allowed to learn to read and write. Other laws set poll taxes that had to be paid to register to vote—and were purposely too high for poor Black people to afford. Even a century after slavery’s end, such tactics kept most Black Southerners from voting.

Another major obstacle was the constant threat of retaliation or violence from the Ku Klux Klan and other white supremacists. For Black Southerners, daring to register to vote could mean losing their jobs, having their houses burned down, or worse: being brutally beaten—or murdered.

Slowly, however, things were beginning to change. After World War II (1939-1945), Black soldiers who had fought for freedom overseas objected to being denied basic freedoms at home. Then, in 1954, the Supreme Court ruled that segregated public schools were unconstitutional. That gave a huge boost to the struggle for civil rights. As the 1960s dawned, African Americans across the country—including kids and teens—were staging sit-ins and other kinds of protests against inequality (see “The Children’s Crusade,” below).

Chris Williams (right) visits a Black family in Mississippi in 1965.

In 1964, inspired by the growing spirit of change, hundreds of college students from across the country signed up to travel to Mississippi for a project that became known as Freedom Summer. One key goal: to register as many of the state’s Black citizens as possible to vote.

Even for volunteers, the task was dangerous. On June 21, the first day of the project, a white mob kidnapped and killed three young Freedom Summer workers—one Black and two white. Despite their fears, the other volunteers continued their important work.

Fanning out across the state, they spent 10 weeks going door-to-door, talking with Black residents, explaining the power of the vote and the election process, and helping people register. Freedom Summer volunteers also called on the rest of the country to recognize the struggles of their fellow Americans to exercise one of the most basic rights of citizenship: the ability to vote.

Chris Williams—then an 18-year-old from Amherst, Massa­chu­setts—was one of those volunteers. In the following interview*, he shared his story with Oliver Viglas, then in sixth grade, for the 2019 Junior Scholastic Eyewitness to History contest.

*This is a shortened, edited version of Oliver’s interview.

What You Need to Know

A man gets a drink from a segregated water cooler in Oklahoma in 1939.

Segregation The practice of keeping people of different races separate. After slavery was abolished in 1865, segregation was enforced in ways that limited Black people to housing, jobs, education, and opportunities that were inferior to those of white people.

Civil Rights Basic rights that belong, by law, to every person regardless of race, gender, age, nationality, religion, or disability. In the U.S., civil rights—such as equal access to voting and public transportation—are guaranteed by the Constitution.

Oliver Viglas: What were you trying to accomplish in Mississippi?

Chris Williams: I was trying to get Black people registered to vote.

OV: Would you describe what you did as mostly organizing?

CW: Yes. [He hands Oliver a leaflet.] This is for voter registration in Panola County, Mississippi, where I worked. I must have handed out thousands of these. That is a piece of civil rights history you are holding in your hand.

OV: So really, your work was about the right to vote.

CW: [reading the leaflet] “Citizens of Panola County, you can register. There is no . . . test; anyone who can read and write can register and vote at the courthouse in Batesville.”

To give you a little background on what happened in Panola County, local Black farmers and ministers got together around 1960 to figure out how to overcome obstacles to voting. Then 16 Black men decided they would go to the courthouse to register to vote. Most of them were returning from World War II, and none of them succeeded in registering. This county was 55 percent Black, but no African Americans there were registered to vote.

CW: They tried multiple times, and that generated friction with some [local] white people. Willie Kuyken­dall, who was one of the 16, was run out of town by a white mob that burned a cross in his front yard. He ended up living the rest of his life in Gary, Indiana, because he couldn’t go back to Panola County.

With the help of the U.S. assistant attorney general for civil rights, Black men of Panola County filed a federal lawsuit to gain the right to vote. In May 1964—two and a half years later—they won. The judges ruled that tests for registering to vote in Mississippi would be temporarily stopped in Panola County. The court order went into effect in June 1964.

OV: Is this where you come in?

CW: Yes. I showed up in June of 1964 with nine other civil rights workers. We were there to change the shape of Black voting in Panola County, the first county in Mississippi to win a lawsuit on voting. By the end of the summer, we had registered 1,000 Black voters—from zero to 1,000 in three months!

OV: Is there a lesson you took away from that era that would be applicable today?

CW: I talk about it in the college course I teach by asking: How do people who have no money, and no political power, achieve equality?

That certainly was the situation of the Black citizens in Mississippi. The answer to the question is: People have to stand up, be united, and stick together. When enough people demand change, stuff changes. It doesn’t change fast, but it changes.

To be part of that was a tremendous gift to me because I saw history being made, and I knew it at the time. I was accepted at the University of Penn­syl­vania in August 1964. But I wrote to the university and said: “I’m going to stay in Mississippi instead of coming to your college. I think I’m learning more down here than you could teach me.”

It still seems like the right decision all these years later, because I was aware that I was looking at history being made and I wasn’t going to get that chance again in my life.

Editor’s Note: In the year following the court’s order halting registration tests in Panola County, Black people there turned out to register—and vote—in growing numbers. But in other parts of the South, they still struggled to do the same.

The Voting Rights Act of 1965 added the power of the federal government to that fight. It outlawed registration tests and enforced already existing bans against poll taxes—defending every U.S. citizen’s freedom to vote.

Students in Birmingham, Alabama, are taken to jail for demonstrating against segregation.

In 1963, Birmingham, Alabama, was known as one of the most racist cities in the nation.

That spring, civil rights activists had been trying to pressure the city into ending segregation, but their sit-ins and protests had no effect.

One problem was getting enough people to take part in demonstrations. Black residents wanted an end to segregation but feared losing their jobs, if not their lives, if they spoke out against it.

Birming­ham’s Black children were just as eager for change—and willing to step in where their parents couldn’t. When an activist named James Bevel asked for young volunteers, hundreds answered the call.

On May 2, 1963, more than 1,000 Black kids—some as young as 7—marched toward the city’s business district. They remained calm and quiet. Yet the police arrested and jailed hundreds of them. The next day, even more kids marched. This time, they were slammed by high-powered fire hoses and attacked by police dogs.

Day after day, as the jails filled up with kids, thousands more turned out to march, holding firm despite the violent backlash.

News images of the brutal response to the children’s peaceful protest shocked the nation. President John F. Kennedy sent officials from the Justice Department to the city to try to resolve the crisis. After eight days, the demonstrations ended with a victory: The city agreed to stop enforcing segregation laws and released the kids from jail.

The struggle against racism was far from over. But the Birmingham Children’s Crusade had made the ugliness of segregation plain to see—and inspired thousands of other young Americans to join the fight against it.

Write About It! Major civil rights victories were won not by a few famous figures, but by countless individuals standing together for the same cause. Describe two examples of this using details from the introduction, Q&A, and sidebars.

Oliver Viglas, 13, says inter­viewing Chris Williams about the civil rights movement showed him that when enough people stand together to fight for what’s right, big changes can happen. Oliver was a runner-up in our 2019 Eyewitness to History contest. You could be a 2020 winner. Find out how by clicking here!