We’ll send you updates on digital features and tips here throughout the year. Check out Junior Scholastic At Home for our favorite stories and tools to kick off your year.
Explore
Dismiss

Sharing Articles with Your Students

The U.S. is a nation of immigrants, built by people who left their homes to seek new lives and opportunities. However, Americans' feelings about immigrants are mixed.

Teacher-approved stories, resources, and worksheets for teaching about immigration in your classroom, courtesy of Junior Scholastic, the middle school Social Studies classroom magazine

Immigration is one of the most talked-about topics in American politics. But how much do you really know about it? Find out why America is often called a nation of immigrants, and what recent government data tells us about immigration trends. 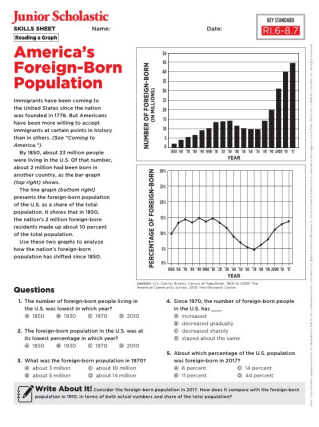 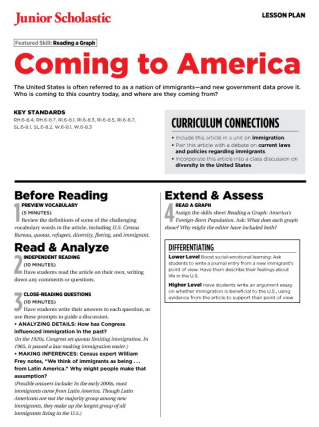 “They’ll Kill Me If I’m Sent Back”

When the opportunity to escape presented itself, Ginger knew she had to act fast. It might be the last chance she’d ever have. Find out how she fled from a violent gang in Honduras, and how she’s fighting to stay in America legally.

Coming to America
Analyze a political cartoon.
Get Worksheet 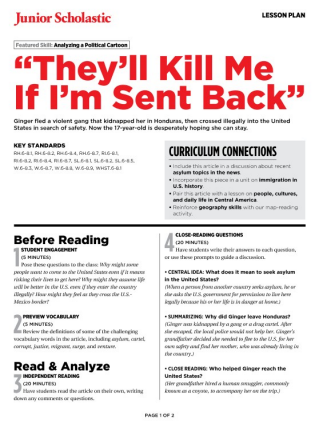 Who gets to be an American? It’s a question at the heart of one of the most heated debates in America today. Get the facts in this article, with support from text features like a timeline and a map. 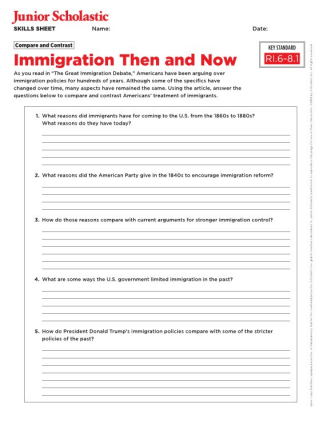 Compare and Contrast
Compare immigration then and now.
Get Worksheet 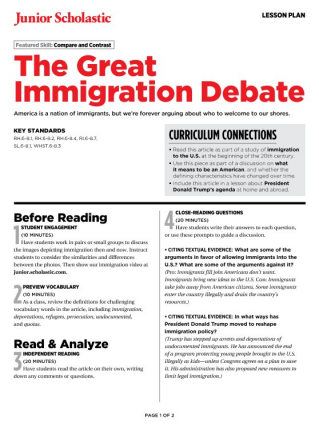 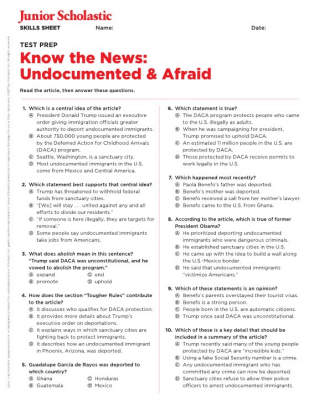 Know the News
Answer multiple-choice questions about the article.
Get Worksheet

Know the News
Answer multiple-choice questions about the article.
Get Worksheet
s 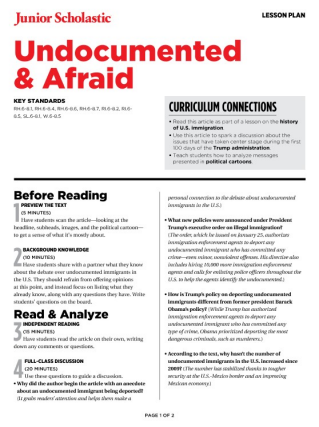 “Our attitude towards immigration reflects our faith in the American ideal. We have always believed it possible for men and women who start at the bottom to rise as far as their talent and energy allow. Neither race nor place of birth should affect their chances.”

“Nearly all Americans have ancestors who braved the oceans—liberty-loving risk takers in search of an ideal. . . . Immigration is not just a link to America’s past; it’s also a bridge to America’s future.”

— President George H.W. Bush, on signing the Immigration Act of 1990 into law

“I had always hoped that this land might become a safe and agreeable asylum to the virtuous and persecuted part of mankind, to whatever nation they might belong.”

— George Washington in 1788 (shortly before being elected the first president of the U.S.)

“As each new wave of immigration has reached America it has been faced with problems, not only the problems that come with making new homes and new jobs, but, more important, the problems of getting along with people of different backgrounds and habits. Somehow, the difficult adjustments are made and people get down to the tasks of earning a living, raising a family, living with their neighbors, and, in the process, building a nation.”

Four immigrants to the U.S. who made an impact on this country—and the world 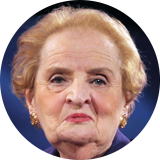 The first female secretary of State in U.S. history was born in what is now the Czech Republic. She immigrated to the U.S. with her family when she was 11.

The computer scientist and entrepreneur who co-founded Google—one of the biggest tech companies in the world—moved to the U.S. from Russia with his family when he was 6. 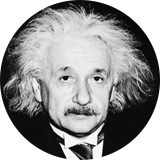 The world-famous physicist (and perhaps the most famous scientist in history) immigrated to the U.S. from Germany in 1933 to escape the Nazis.

The man who invented blue jeans moved to the U.S. from his native Germany at age 18.

Supplemental resources that link to external websites about immigration

A Q&A on American attitudes toward immigration and immigration-related actions and policies by the government in the U.S.

the idea that the U.S. economic, political, and social systems make success possible for anyone willing to work for it

to become fully part of a different culture or society

the act of moving from one place to another

lacking the official papers required for legal immigration or residence

The Roles of the Presidency

From Commander in Chief to chief of state, the president has many critical roles.

An overview of humanity’s first large societies: how they formed, who ruled them, and how they influenced the world today.

The Constitution is the supreme law of the land. It established our federal government and defined our government’s relationship with the states and citizens.

Get to know Martin Luther King Jr., Barbara Johns, the Little Rock Nine, and other pioneers of the civil rights movement.

Women’s History: The Struggle for Equality

Learn about important women throughout history—including Susan B. Anthony, Elizabeth Cady Stanton, and Sojourner Truth—and the progress that’s been made in the fight for gender equality.

The History and Heroes of World War II

An overview of World War II: why the U.S. got involved, what citizens did to fight back, and how people worldwide were affected

These inspiring teens fought for what they believed in—and made history in the process.

Teaching the art of debating—and how to write an effective argument essay—can help students master critical-thinking and communication skills.

In an increasingly digital world, being able to navigate technology skillfully and evaluate online resources for accuracy and trustworthiness is crucial.

Teaching map skills can build students’ geography knowledge—and enhance their understanding of the world in which they live.

An overview of civics: what it means to be a good citizen, how democracy works, and why staying informed and engaged matters—even as kids.

The Civil War and Reconstruction

Use these features and supporting resources to give students deeper as well as broader knowledge of these key periods in U.S. history.

Empower Your Students
to Explore Their World